It’s that moment when we all become James Bond, isn’t it? When we withdraw money from a cashpoint, suddenly we’re glancing over our shoulders, clumsily masking the keypad with our hands, suspicious of anyone within a two-mile radius as we swipe our cash from the machine.

Now, police have revealed that criminal gangs have been installing micro cameras in cashpoints, angled at the keypad in order to capture PIN numbers. Several ATMs in the capital city have been found to have false coverings attached to the front, behind which is a pin-head camera. These cameras are so small that most people wouldn’t even realise that they’re there.

If the crime wasn’t so serious – hitting the pockets of everyday users – you’d be forgiven for thinking this is something out of a spy film. 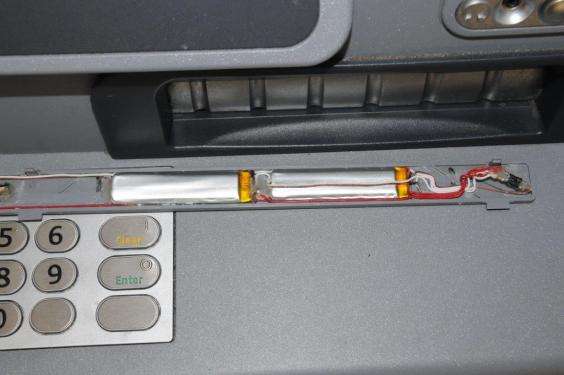 The first camera was discovered on February 18th, at a cash machine in the City of London. A mere two weeks later, a member of the public found at another camera attached to a nearby ATM. Several days ago, two more cameras were found, hinting at a wide-scale operation carried out by criminal gangs. However, despite police swiftly swinging into action, no arrests have yet been made, and the investigation continues.

Discussing the issue, Pc Matt Clarke of the City of London Police Crime Squad explained:
‘The vast majority or cashpoints in London are perfectly safe – but criminals have been known to tamper with them. We work closely with banks, building societies, and other cash machine vendors, to make sure this type of crime doesn’t happen.’

This isn’t the first time criminals have modified ATMs in order to steal banking information – and it’s unlikely to be the last. In the past few years, we’ve seen cunning attempts from devious criminals including installing so-called ‘skimming’ machines which can hold on to your card the moment you insert it, while a camera films you inputting your PIN – and that’s really all the criminals need to empty your accounts, while the card owner simply believes the machine has eaten the card. This led to banks like Barclays installing plastic coverings over the card slot, which prevents criminals from attaching their own equipment to the cashpoint.

Other techniques used by banks to ensure security include keypad covers, reflective display screens and mirrors – just in case anyone’s watching over your shoulder.

News of the covert cameras comes hot on the heels of the return of skimming, which has made a comeback in the North of England. Lancashire police have recently warned of the presence of devices ‘skimming’ cashpoint users in areas such as Preston, Bamber Bridge and Leyland.

Pc Clarke was keen to emphasise the importance of being aware of your surroundings when using ATMs, saying:
‘Take care and stay vigilant when using cash machines in the City of London, and London as a whole. If you spot anything unusual about a cash machine, or if there are signs of tampering, don’t use it. If in doubt, try and use a machine inside a branch.’

Of course, that advice – remaining vigilant at all times – applies regardless of whether or not you’re in one of the affected areas. After all, that’s your money, and it pays to keep it safe.