Trending
Follow @PFNewsUK
You are at:Home»News»Look Out for These Rare £2 and 50p Coins Coming This Year

Prepare your purses and wallets – the Royal Mint has revealed the designs for five new coins, hitting circulation this year.

All of these coins, which mark events that shaped Britain’s future, will be limited edition, so if you’re an avid coin collector or a cheeky treasure hunter, you’ll want to keep a look out for these coins.

We’ve seen this before with the 2016 release of the polymer five-pound note and 2018’s Jane Austen tenner. As each new note entered circulation, thousands eagerly checked the serial number to see if the note was worth more than the face value – with some particularly rare notes valued at £20,000.

So, if you get your mitts on one of these coins, it could be worth a pretty penny (or a pretty 50p!)…

St. George and the Dragon £5 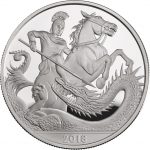 You may not have even realised there were £5 coins – and this one will be even rarer: With a reimagined St. George and the dragon from artist Jody Clark, this coin symbolises the fifth birthday of HRH Prince George. 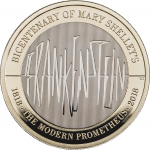 It’s been 200 years since the publication of Mary Shelley’s Frankenstein: The Modern Prometheus. That’s what this coin celebrates. But if you’re looking for Boris Karloff’s grim visage, you’ll be disappointed. Since the original book didn’t contain illustrations, the Royal Mint has opted for a distinctly creepy, electrocardiograph-style rendering of the name ‘Frankenstein’. 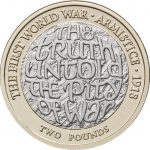 Another new £2 coin hitting the streets marks the centenary of the end of WWI. This low-key design features the words of every schoolboy’s favourite wartime poet, Wilfred Owen, from his poem Strange Meetings: ‘The truth untold. The pity of war.’

Centenary of the Royal Air Force £2

Keep your eyes peeled for this one, chaps. 1918 saw the establishment of the Royal Air Force, just seven months before the end of the First World War. They’ve been defending our skies ever since. Pip-pip.

Representation of the People Act 50p 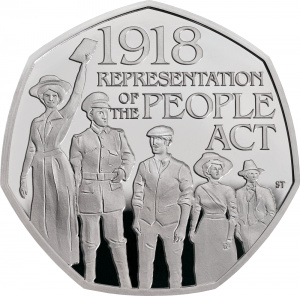 The 1918 Representation of the People Act essentially allowed thousands of people previously disenfranchised to vote. This included women over the age of 30, servicemen aged 19 and above, as well as men above the age of 21.

‘This is an important year for the Royal Mint, as amongst our 2018 coin themes are the centenaries of three key events that have shaped the country as we know it today. The Representation of the People Act 1918 50p remembers the moment women were first given the right to vote, while 200 years of Mary Shelley’s Frankenstein are marked in a £2 coin. Two more £2 coins honour moments that will be occupying the thoughts of many this year. The 100th anniversary of the First World War Armistice, and the 100th anniversary of the formation of the Royal Air Force.’

It’s not yet known just how much your collectable coins could be worth, although as an indication, the rarest £2 coin out there is worth approximately £50. Not a bad deal if you find it in your change!