The UK Peer to Peer Lending Association (P2PFA) has published Q4 data for both SME and consumer lending. The P2PFA said “fourth quarter of 2016 has demonstrated continued growth, with the expansion in lending volumes confirming increasing levels of confidence.”

The final three quarters of last year saw £843,917,964 in new lending transacted through P2PFA member platforms, with nearly £3 billion over the full year.

Commenting on the data, Robert Pettigrew, Director of the P2PFA, said: ‘2016 has been another year of impressive growth in peer-to-peer lending in the UK: further consolidating the sector’s position in the future of financial services. Whilst uncertainties in the broader economy attract much comment, it is clear from the robust growth in levels of peer-to-peer lending that P2PFA platforms and their investors are positive about the future’.

Reflecting on the strong growth in levels of business lending, he observed: ‘levels of lending to businesses through P2PFA platforms has gained considerable momentum over the course of recent quarters, and as investors focus on what might emerge from the post-referendum uncertainty, the position of peer-to-peer lending as a major part of the solution in a post-Brexit world is unquestionable’. 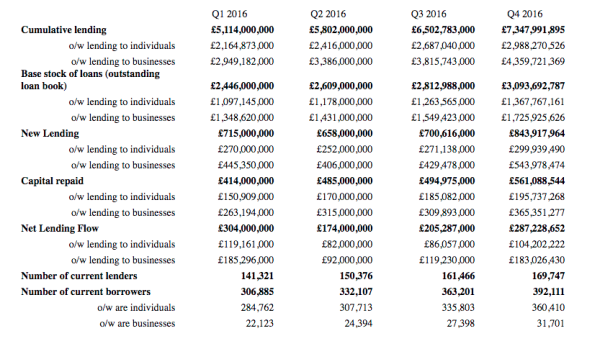